Foxwood Soap fiction based on real-life events at Foxwood House!

From the pen of Jan Groenewald, owner, partner, actor, playwright, TV producer, a fictionalised account of every day events in the lives of staff and guests! Faulty Towers? Not quite!
Previous episode: Mary has been to the Edinburgh Festival Fringe. Samuel Beckett's 'Krapps' Last Tape' and Nassim (by Nassim Soleimanpour) were two of the plays she discussed with her son John, who stayed behind in South Africa at Foxwood House.
This episode: Mary recalls a conversation with Lillian, her 83-year old mother. 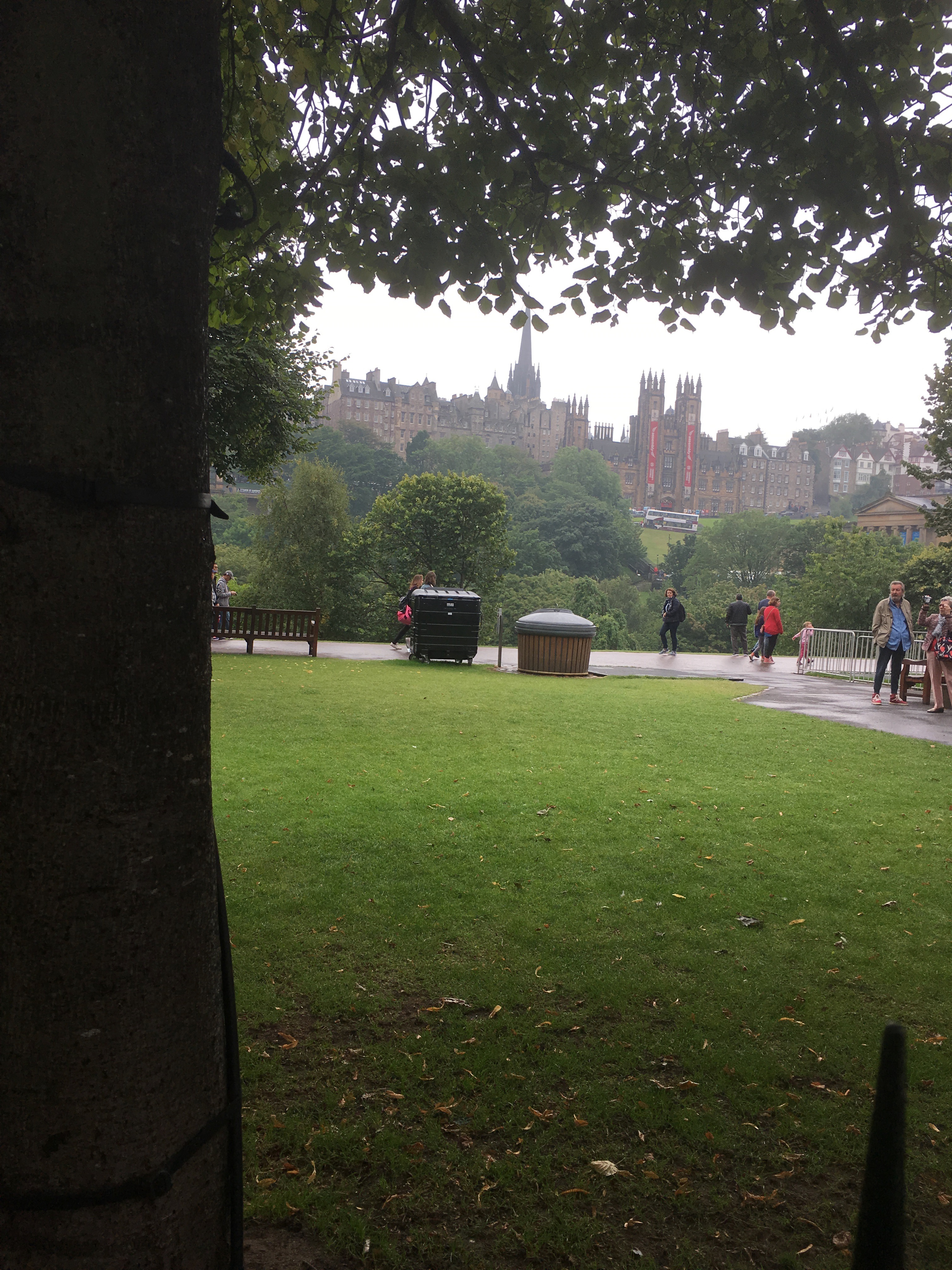 Mary Hood is 42 years old and married to Stephen Hood, a brilliant heart surgeon working in a hospital in Johannesburg (and also sometimes assisting Dr Susan Vosloo in Cape Town. Susan is regarded as one of the world's top heart surgeons. It’s worth Googling her name). 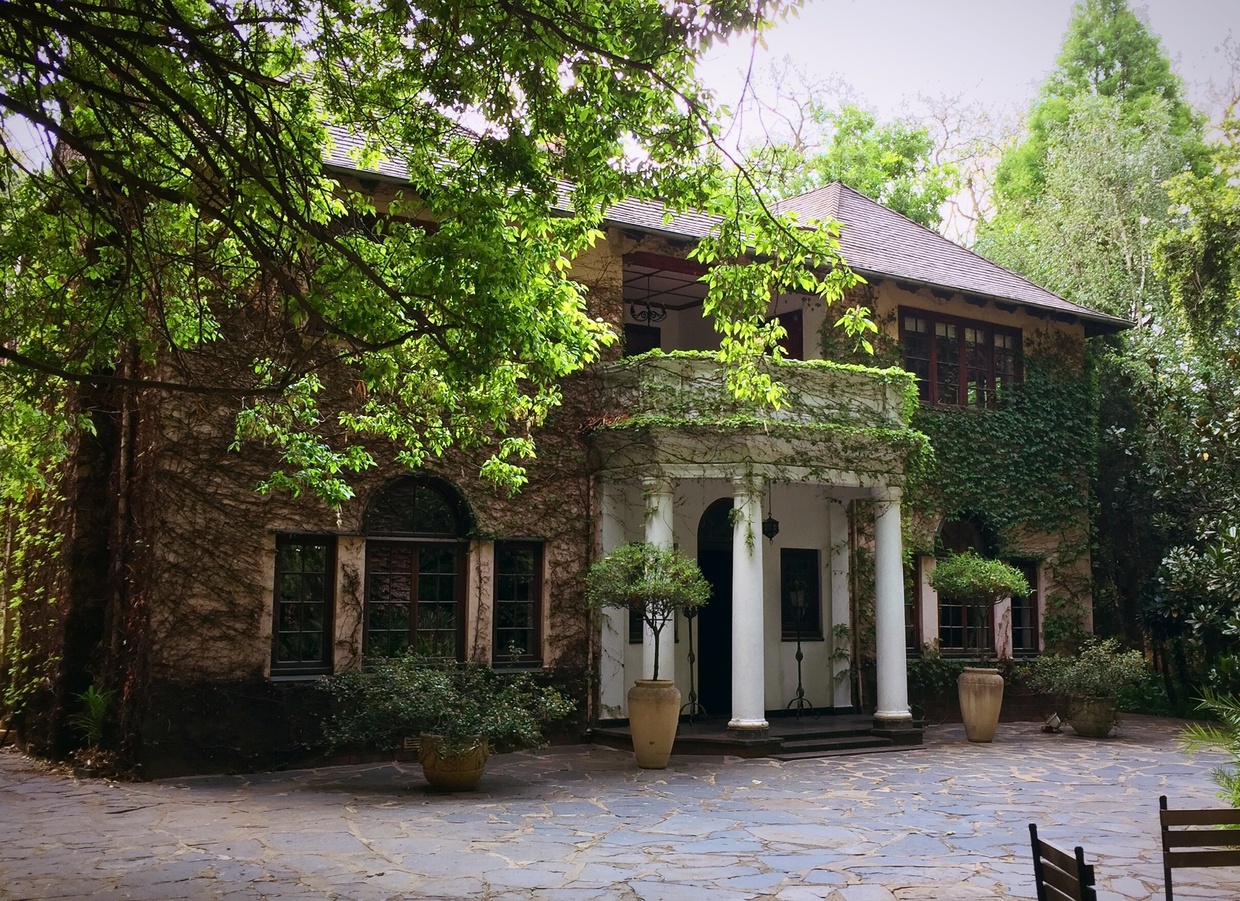 October already. I have been back from Edinburgh for more than a month.

It was wonderful to see Mother still living so gracefully in the old Victorian house in Glencarin Crescent in Edinburgh. She is a source of stability and continuity in my life. A wise lady at the age of 83. Lillian. As the family and even us children call her (from time to time).

A week before I left Edinburgh we had this extraordinarily strange conversation about my son John and Oscar Wilde.

Lillian was knitting a colourful blanket, the old style, squares sewn together, and it becomes a Christmas present “from Granny”.

“I would have liked to see my grandchildren more often. So many things are just not possible. I can only afford coming to visit every two years. But at least last year when John was here during the Edinburgh Festival Fringe we had a chance to get to know each other better. A well-adjusted young man,” Lillian said.

She paused, looking at me. “He has your father’s aristocratic nose, slightly arched. He saw more than thirty plays … He was so obsessed with the Oscar Wilde play performed by Anthony Clerck. I think he saw it three times and I went to see it once with him,“ she remarked casually.

“He never told me he saw it three times,” I ventured.

Lillian looked up over the rim of her glasses and continued knitting.

“Oh …  Well I think it was badly cast.  Oscar Wilde was not an oil painting.”

“He couldn’t stop talking about the good acting of the young Oscar Wilde," I said.

“He acted well but he was just too pretty a boy for Wilde,” Lillian said.

Again a pause and Mother just went on without looking up from her knitting.

“Mary, I think the man was a genius … an incredible talent for portraying the human condition. He was a keen observer of the society he was part of….”

“Yes Mother … the fall of a genius … but why three times?”

Mother Lillian increased the speed of knitting without looking over the rim of her glasses.

“The pretty boy perhaps….so it takes all kind of people making up our world.” She stopped talking.

We left the conversation just there.

I must say I was somehow confused.

My 22-year old son is indeed also a pretty boy.

Mary realized her purchase creates amazing possibilities: one was to establish a boutique hotel. Her favourite author / presenter / actor Stephen Fry stayed there for more than ten days along with Oscar-winning actress Emma Thompson. Also a guest has been David Emmanuel who designed Princess Diana’s wedding dress.

Dr Hood is giving his wife his full support seeing that Mary loves old places. She was raised in Edinburgh in Scotland. Daughter of a priest.

Mary and Stephen have 3 children. John, Joseph and Lilian ( called after Lillian’s mother, a widow, still living in Edinburgh.)

Buying the property had one disadvantage. The previous owner's sister Marie is an elderly lady who has a life- time right to her cottage at the gate.

This becomes an interesting and absurd situation. Her brother passed away and all the family heirlooms were sold to Mary Hood with the house. She is now contesting her  brother's will.

Her brother, a tv producer,had a fatal heart attack while shooting a documentary  on the heart surgeon Dr Chris Barnard. His partner Simon completed the film and is now up for an Oscar nomination.

Mary Hood is an avid student and learns a new word daily and also feeds the information about her daily discoveroies of strange and rarely used English words to her son John and her best friend Alice Fraser (a frustrated journalist at a newspaper in South Africa – we will get to know Alice at a later stage.)

Today Mary's Skype from Edinburgh to her son John whom she left to run Foxwood House in her absence:

Mary: How is Foxwood? I am so concerned to leave the place...

Mary: Nikita (the manager) tells me we hosted a celebrity birthday party on Sunday.

John: Yes, the author Jack Cohen was here to help Lerina Erasmus celebrate her birthday. She was the writer of Manheim Sage and Lelie Moordenaar … It was her birthday. Lots of  celebs … Also from the Afrikaans acting fraternity, Mom Brümilda van Rensburg, Lochner de Kock and the producers from Sewende Laan were here…I'll send photo’s. And you, Mom?

Mary: The Edinburgh festival is hectic and quite weird. Saw Krapp’s Last Tape…by Samuel Beckett and directed by Michael Coigan.

John: I love Samuel Beckett…I suppose it was brilliant..

John: I suppose it’s a slice of life. Existential philosophy. Sartre ... He wrote about the meaningless of life

Mary: I do not want to sit one hour listening to it.

John: So you should not see a Samuel Beckett.

Mary: One fascinating moment when the main character - that is our Mr Krapp - reminisced about his mother … there was a word that he wished to remember and he actually looked it up in the dictionary

John: You and your words again.

Mary: I think… it was viduity…

John: Being a widow…

Mary: Well Beckett makes his main character look up the word on stage.

LATER: (Mary and son John; his mother's friend Alice has joined him)

John: Nikita tells me Patricia de Lille will be booking in tomorrow…

Mary: She usually stays in Jessie’s. Just remind her…

Mary: We saw a weird show yesterday… Getting 5 stars… Nassim. I must say your grandmother didn’t like it at all. I have to admit I thought we have been taken for a kind of ride…

John: Yes, we read about it … Isn’t it the Iranian playwright Nassim Soleimanpour. It’s supposed to be brilliant…This is the one theatrical experience I would have loved …

Mary: Oh no! Talk to your grandmother…

Alice: I hear you, Mary … Nassim. I know all about it.

John: It’s supposed to be great, Mom …an audacious theatrical experiment that explores the power of language

Alice: (From the side talking loudlyt so Mary can hear her) Yes! Yes! All that…yes to unite us in unknown … Uncertain times…. I know one should never stop learning… Like your mother with a new word every day… At my age…I could master quite a lot but definitely not learning Farsi now. This is what it is all about…

John: Mom, perhaps you were not ready for that kind of experience .. Since the premiere in 2011, in Edinburgh and at the Summerworks festival, the play has been translated into 25 different languages and performed over 1000 times...

Alice: Sorry to interrupt you…Your Mom and I don’t need a lesson… that the biggest names in theatre has performed it…like Whoopi Goldberg…

Mary: (loudly so she can be heard by both, who seem to have forgotten about her) I'm signing off, darlings ...

John: (pretends not to hear his mother talking to them from Scotland)  And also Sinead Cusack and Ken Loach…

Alice: Sorry I do not know who… Sinklem

Alice: That’s enough…. Remember I was an English teacher for 27 years… And your mother is still trying to teach me her wonderful discoveries of words ...There is much more to life than getting to know words…and all that… I work on a spiritual guidance.

Mary: (shouts so she can be hear by both, who seem to have forgotten about her) I'm signing off, darlings ... and that's final.

John: No lesson today… Mother will take care of that ...

Alice: Your mother would like to talk to you…